Last fall, a group of friends and I started a book club. It was the idea of my wonderful life-long friend Elisabeth. Even with all I have going on I was excited to try it out because I have always wanted to join and sustain a book club. I have tried in the past to start my own and attended others but nothing has stuck.

Now, with the help of Audible, I am able to listen to almost all books in an audio format. That allows me to listen when I am driving, during my lunch, doing chores, or just relaxing for the evening. Pretty much whenever I have a chance to put on my head phones, I can listen to a book. Armed with this new technology, I decided to dive in with both feet to the book club idea. It’s a great group of gals, and a chance to have a “ladies night” or “girls night in” once per month, when I otherwise might not find time.

So for our first venture, we read The Silver Star by Jeannette Walls. 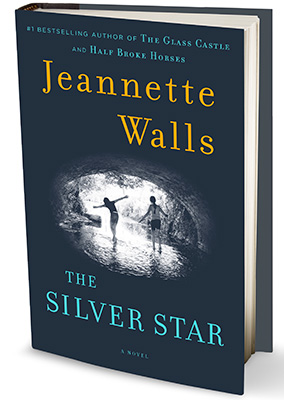 This book tells the story, and is narrated in first-person, by 12-year-old ‘Bean’ Holladay. She lives in California with her 15-year-old sister Liz, and her mother Charlotte. Her mother is a wannabe singer/musician and prone to immature behavior. She bounces in and out of relationship; leaves her children alone for days, sometimes weeks on end, alone; and is known to make things up. When it is discovered their mother has left for an indefinite amount of time and child services starts investigating, the two girls make the bold decision to travel across country to find their uncle (their mother’s brother) and live with him in the family’s estate. Once they convince their uncle that they should stay, they attend school and find work with a local businessmen. Things are not easy for them in Virginia and the girls must navigate school, work, and personal relationships with only each other to rely on.

This book has all the makings of a good story. The backstory about the girls and how they have grown up with their mother is both sad to the reader and normal to Bean, the narrator. The choice of narration by Bean gives the book both a simplicity, but also might be the reason for the lack of detail in some areas. As a first-person narrator, Bean is only able to describe what she perceives to be happening to herself and others. We are therefore limited in knowing how the other characters actually felt. It might have been a nice insight to hear from Liz and even Charlotte about some of the situations they encounter.

The story brings up a lot of controversial and serious issues. But it feels as though the author didn’t want to get to heavy into these issues. It is as if the surface was only scratched on some of the problems and it leaves the reader feeling a bit let down. You either want more detail or more depth. But again, this could be the fault of the narrator being a pre-teen girl.

Ultimately, I feel like The Silver Star is a quick read that is somewhat forgettable. The characters are not fully developed and many of their troubles and behaviors are not addressed, much less given context. I think the author rushed through parts and left questions unanswered. As a reader, it is wholly frustrating. Also, the title is misleading and is another source of frustration for the reader because it feels like a throw-away rather than title material for the entire story.

I have heard from others that Jeannette Walls is a great writer, and that her book The Glass Castle is superior. Being that it is a memoir, the authenticity my lend to the experience. Unfortunately, for me, this was my first venture into her writing, and as a fiction novel, I was left unimpressed and leery of spending my time on her writing again. The again, who knows what the future holds. Perhaps my book club will want to revisit her offerings in the future.

Has anyone else read The Silver Star? What did you think?