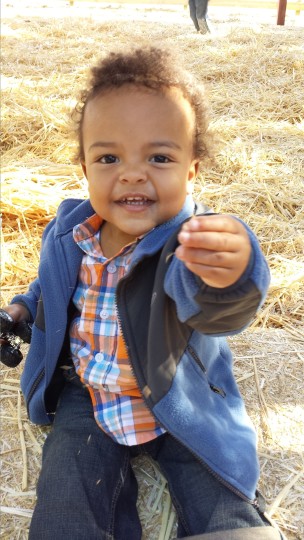 Baby G had a very important milestone this past weekend. He got his first haircut. It has been a long discussion over the past few months as to whether or not we should cut his hair. We were hoping that it would just even out on its own. But the top and sides kept growing while the back stayed short.

When G was born he had dark, thick, straight hair. It still trips me out because the girl with the kinkiest of curls would have never thought, even with a caucasian husband, that I would ever have a child with straight hair. It was too cute for words and would stick up in the front in the most adorable way. Then about at about 4-5 months, it all fell out. Broke my heart. I loved his soft straight hair. Then his curls started to come in…with a vengeance. The hair the grew back was a different texture completely. This was the real thing. The longer it got, the more I realized that my boy got my super kinky curls as well.

Fast forward to earlier this month. My father had begged us not to cut it. My mother put in a braid when he stayed the night. This was the straw that broke the camels back.

He was unhappy during the cut to say the least. He cried and fought but I think it looks great. So much easier to wash and manage. He also looks so much older which is the hard part.

Of course we have an envelope with some of the hair from his first cut to add to the baby book. Another milestone to mark as he grows into my big boy.